Social Objects—The Next Objects of Our Affection?

While attending WOMMfest in Chicago last week, I had the opportunity to sit in on Hugh MacLeod’s session on Social Objects. Hugh is a really interesting guy and compelling speaker. He is a cartoonist (who wouldn’t love to have that claim to fame?) and has been the driving force behind the popularization of the term “Social Objects.” In his opinion, “Social Objects are the future of marketing.”

So, what is a social object? And why do they matter? McLeod defines social objects as “the reason two people are talking to each other, as opposed to talking to somebody else.” He notes that people are social animals and like to socialize—but there has to be a compelling reason to spark socialization. The social object is essentially the “node” in the social network that facilitates meaningful interaction among people.

In her book The Participatory Museum, Nina Simon describes social objects as “the engines of socially networked experiences, the content around which conversation happens.” She explains that “Social objects allow people to focus their attention on a third thing rather than on each other, making interpersonal engagement more comfortable.”

Given these descriptions, a social object could be almost anything! For example, my daughter is one of 15 players on a local hockey team. Her team plays two to three games a week and the families all gather together in excitement to cheer on the team. The social object in this case is hockey. Hockey is the object that fostered the social interaction among this group of people.

My colleague Peter’s most reliable social object is his beloved Shih Tzu-Maltese, Lucy. Her friendly look and cuteness garners lots of attention during walks, which results in him meeting more people in the city he just moved to than he would have otherwise. It is much easier to interact with Lucy, but that ultimately results in a connection with Peter. So the attention focused on the dog—or person to object—turns into socialization—or person to object to person.

A business example of a social object is WOMMfest itself. Marketing, branding and social engagement experts from three cities gathered to celebrate word-of-mouth marketing and learn more about a number of related topics, social objects among them. I am sure you get the idea.

So, why do they matter? According to McLeod, it is really quite simple. If people are not talking about or socializing around a company, its product or brand, then they are talking about someone else. And that’s bad.

He notes that “the hard currency of the Internet is not Facebook ‘Likes’ or Twitter retweets…by themselves, they’re worthless. The hard currency of the Internet is ‘Social Objects.’” Today, getting people to share in a meaningful manner with other people is far more important. McLeod states, “You’re either creating them [social objects] or you’re not. And if you’re not, you will fail, end of story.”

OK—so how do you create a social object? McLeod says it all lies in creating “…Social Gestures. And, lots of them.” During the WOMMfest session, he shared nine principles for creating social objects. Among them were: creating play; using new language; pushing the boundaries of design; and creating new context, unexpected experiences and places/reasons for people to meet in person.

Simon’s ideas for creating social objects are similar. She suggests that “design tweaks can make an object more personal, active, provocative or relational.” She noted that “Social platforms focus primarily on providing tools for visitors to engage with each other around objects. While attractive and functional presentation of objects is still important, it is secondary to promoting opportunities for visitors to discuss and share them.” 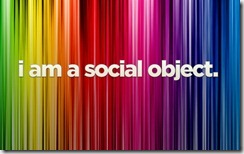