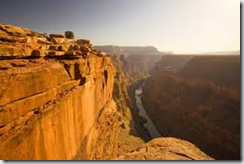 Why don’t fad diets work? Experts say that when dieting, people become fixated on what they eat, how often and the corresponding loss of weight. Once that weight goal has been achieved and the pants fit again, time to celebrate. No more hard-boiled eggs and plain boiled chicken breast. Whoo-hoo! Success! Let’s grab a burger and a beer, baby!

Five weeks later, the weight is back with a vengeance. Why is this? Simple. People place a short term focus on the tactics of the diet but totally ignore what is more important. That being a long term change in behavior. You see, it’s not just what you eat but how you approach the whole concept of health. It’s all tied together. You are tired. Don’t work out, you get stressed and you eat. That quick bag of Doritos as a lunch ain’t helpin’ things, neither is the diet soda for breakfast. Meals are things you get on the go. It is learned behavior that becomes engrained behavior.

Why is social marketing hard? Same reason as why dieting doesn’t work long term. It’s because, corporate teams have engrained behaviors which are focused on the short term. Campaigns and product launches. Beginning, middle and end; then onto whatever else is next.

Couple that mentality with a constant shuffle of teams and people through the endless re-orgs, attrition, upward and lateral movement of team members and focusing on anything long term becomes almost impossible…especially when we are measured and judged on the now.

By the way, if you don’t think that social marketing is hard, then you are not doing it. You are still in the social campaign/social media mode and haven’t yet crossed the chasm.

Doesn’t losing five pounds by starving yourself this week sound better than losing 1 pound by taking the stairs instead of the elevator? More immediate gratification! Five pounds baby! One third of the way to my goal!

So how important is getting social marketing right? What impact will it have on the fundamental way we do business?

Social marketing is a disruptive model that will have far reaching ripple effects on corporate strategy that we cannot yet quantify. When Henry Ford refined and adopted the assembly line, when interstate highways were laid, when the light bulb became commercially available, the advent of the cellular telephone, the Internet, the growth in adoption of Twitter.  These are all disruptive forces that no one fully understood or really appreciated at their outset. However, when taking the long view, you can begin to see how these things, well…changed everything.

Social marketing and ultimately, social business, which I define for purposes of this post as ‘collaborative engagement and dialogue which facilitate either common goals or common interests, done in ways that are transparent and communicated in languages, words and pictures we each understand and identify with’ are already beginning to change everything.

Remember the book Crossing the Chasm? The whole premise was around innovation and adoption of new ideas and process that allowed organizations, even big ones to become nimbler and allow their product and service evolutions to effectively go from early adopters to mainstream; which ultimately is the goal of every corporate entity, right? Organizations needed to adopt a process of change or fall into the chasm. IBM is a great example of one who made the crossing successfully. Zenith & Tower Records? Not so much. Ahhhhhhhhh, thud. 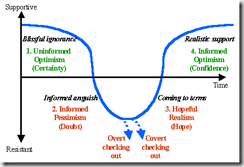 If your organization is still in command and control mode, if teams can’t or won’t be collaborative, if the silo walls of your organization are thick and without holes which allow for information, ideas and effort to pass through, you will never cross the chasm until a behavior change occurs-organizationally.

However, if you are attempting to evolve your business, over time, through new learned behaviors (which may be simply stringing a multitude of social initiatives or campaigns together to create the look and feel of what social marketing is really like) you are likely in either Step 2 or Step 3.  See above chart.

Where ever you are, the important thing is getting through Step 2. Why is this? Well, social initiatives are based on relationships. Relationships are chaotic and ever changing. They are hard to plan around. They are not necessarily linear or fact driven. They are emotional and conversation driven. Try planning a traditional critical path around that. When you do, welcome to Step 2.

Everything you used to do doesn’t fit neatly into the new social model and that’s frustrating. The danger is giving up and going back to the old way of doing things (checking out).

However, when you learn to be truly collaborative with your peers, subject matter experts, customers and prospects that they aid in the planning and activities; outcomes and expectations magically align. The chaotic becomes more predictable. Welcome to Step 3, which is where you start thinking differently and acting differently and a new normal begins to grow.

Since social marketing is as new an idea as it is disruptive, we haven’t seen the full impact that these social ripple effects are having on organizations or industries. Therefore, few organizations, if any really, have moved into Step 4, but many are on their way! As more companies move across the chasm, this will force their competitors to follow suit. For everyone that makes the move, either by choice or by force, the new learned ‘social’ behaviors will eventually become engrained behaviors and that’s when social marketing becomes the norm and the power of social will be felt, understood and acknowledged.

Social is here to stay folks. That’s a fact. What the impact is, no one yet knows; only that it will be substantial. So where are you on crossing the social chasm? Is the cliff ahead of you or behind you?