Get With the Times 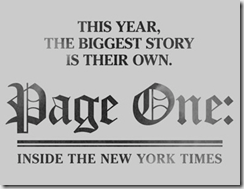 My workday always started the same: a venti Starbucks with a side of the top dailies. I came into work at least two hours early to allow for time to devour all the news that’s fit to print. After all, reading a broadsheet on the bus was simply not practical.

A few months ago, I got an iPad 2 and discovered Flipboard.

Flipboard is a game-changing app that redefines how we engage with content by turning our Facebook, Twitter and RSS feeds into interactive custom magazines. With it, I can zoom in on an article, play video online and select articles to share, favorite, like and retweet.

It was love at first touch.

Flash forward to today. I no longer subscribe to the Chicago Tribune and don’t even bother picking up the newspapers that line the kitchen table in our office. Don’t get me wrong, I’m still a news junkie. And I can still prove my worth talking about the topics of the day at the watercooler. But, I’ve given up the ink smudges on my hands for something tidier and greener.

With this in mind, it seemed appropriate and oh-so-timely to attend a press screening of Page One Inside The New York Times. Leading off with a montage of the closure in 2009 of some of the top newspapers in the country, the documentary asks the question: can the “newspaper of record” (and traditional media as a whole) survive and remain relevant in an era where citizen journalists blog and post status updates as news happens?

I’m not so sure. Certainly, the numbers are grim: as of June 2010, only 40% of Americans say they read a daily newspaper regularly. Last year, 40 newspapers stopped publishing a print edition entirely (and only two of those papers went online).

But, while the printed word may be giving way to online and social media, the filmmakers make a very interesting point: there would be no content or conversations without the major sources of news. Consider:

· Less than 1% of original reporting originated from blogs

Clearly, something has gotta give. “The economics of this business have always been that it required both advertising and payment from the reader, and for the last 15 years on the internet, we sort of pretended that wasn’t true. This is the end of pretending.” (Richard Perez-Pena, New York Times reporter).

If mainstream media does fail, who will pick up the pieces? Who would have the resources and commitment to accurately report the news? And how will we, the reader and viewer, filter our news? Only time will tell. I just hope I’ll be able to continue to get the New York Times and CNN on my pad.