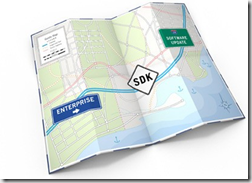 Making decisions in isolation is rarely a good idea especially decisions that impact other people.

Let’s review a few possible scenarios, both big and small and see the cause and effect of isolated decision making.

Isolated Decision 1:  You stop at the fireworks store and dropping $500 on those really big fireworks to impress your neighbors tonight.

Outcome:  Scaring your three year old daughter half to death with the first volley from the driveway and having no second volley since the giant fireworks you bought are banned by your neighborhood…which you forgot to check.

Isolated Decision 2: You lead a team of five who are responsible for launching your company’s new i-phone app with a multitude of seemingly cool features.

Outcome:  You spend three months and six figures on it’s development, promotion and support. Then you find no one is downloading it because the most important thing the market wants isn’t included.  Unfortunately, you passed on including those two things due to the cost of everything else you included.  And they don’t want.

The point in both of these examples is, that for effective decision making, you should integrate people who are stakeholders in your decision process; those impacted by your activities and outcomes.  There is a cause and effect to every decision that can radically change your roadmap.

In example number one, knowing that your neighborhood has fireworks restrictions would change your decision path from the heavy duty stuff to sparklers and other lower profile explosives.  Checking with your wife and the neighborhood association would change a lot.  Same with example two; including customers and SME’s early would have changed your direction.  You would have ended up with a much simpler, less expensive and more elegant app that does exactly what customers need most.

I am not advocating focus groups here, but rather deeply (yet appropriately) involving community members as part of your team and helping with the decision process.  Within healthy communities, there resides a wide cross section of stakeholders you can and should tap to build and contribute to the roadmap you’ve built to do whatever it is you are tasked to do.  Not doing so can result in missed opportunities or worse, failures.

You don’t need hundreds or dozens of these people.  A handful will suffice.  Remember, it is quality not quantity you are after.  You want representative samples of the larger market to help you and this is what advocates and SME’s are good at providing.

First by interest.  You want participants whose reward is the participation itself.  The best method is to recruit hand-raisers; people who want to be there.  Who are committed to sustained engagement.  Ask yourself, does this person get enjoyment out of being a part of this community?  Do they have to be there or do they want to be there.  Look for the want.

Second, seek expertise.  You want individuals who have a strong working knowledge in either a specific area, topic or field that is important to you and your team.  Some advocates have been known to have knowledge bases that exceed that of many employees.  Also, SME’s are called SME’s for a reason.

Third, select the behavioral types you want, when and where you need them.  Creators, Critics, Collectors and Collaborators, which is an organizational construct for advocates that ComBlu has created that aligns with Forrester’s accepted Social Technographic profiles.

Ability measures the person’s skill or knowledge base.  Value measures their commitment and social skills.  A person with great technical knowledge or insight ,who won’t live up to commitments, isn’t trusted by his or her peers and is difficult to deal with isn’t very valuable.

Knowing all of this but before you take any action within your community, You’ll want to have or get consensus from your team as to the involvement and value of community members.  If you have a cross functional team, some may get why to include community members, others may not, so do your homework first and have a plan.

Even with a plan, your team or organization has to universally have an appetite for this type of inclusion.  It can’t be the pet project of one or two people or teams.  Everyone needs to be on the same page for it to work well.

I recall a meeting back in the mid-90’s in which our team advocated tapping customers when we had only a mandate and an idea.  Our team had been tasked with developing a new piece of software for an existing product. One senior team member rebelled against the idea saying there was no point in bringing customers in when all we had was a white sheet of paper.  He believed businesses had walls for a reason.  Our point was that ‘early’ was exactly the right time to bring customers in and they played an important role in our developing something successful. He was the liaison for product development and refused to budge, so the initiative never got off the ground.

Customers never got involved until the product was ready for release and the sad thing was, at that point, any changes were too late (and there were changes that needed to be made!)

It’s important to note that tapping community members for decision help isn’t limited to products or services or fireworks for that matter.  NDA level involvement of customers can be useful in gathering insight for new investments or strategic initiatives.  This can be a powerful approach but again, requires the organization to have the cultural appetite to receive what it asks for and then do something with it.

In Charline Li’s book, “Open Leadership”, she discusses the power that tapping stakeholders can have.  Solarwinds for example has only 2 CSR’s to support 8,000 customers, using a purpose built community of 25,000 network administrators; a handful of which helped throughout the decision process.

For Microsoft, tapping customers to help plan and then transition from call center support to community centered support is something we’ve seen work first hand amazingly well.  Global companies as large and entrenched as Microsoft to firms as small and nimble as Solarwinds embrace this philosophy and where they do, they perform well.

Let me provide another, slightly different example.  A leading computer company’s financial department wants people to finance instead of paying for the computer outright.  They collaborated with the marketing team and tapped into their customer community for help.  Historically, this computer company used a lower interest rate to incentivize computer financing campaigns.  When the community was tapped to help architect and make decisions associated with this program, what they learned was that customers wanted a peripheral incentive instead of a slightly lower interest rate.  Knowing this early helped the team’s decision process, made for happier customers and a more profitable computer company.

Whether you call it ‘Open Leadership’ or ‘Social Roadmapping’ or something else, integrating community into your firm’s operational decision making provides a distinct competitive advantage, but only if everyone on your team is on the same page with respect to the value and methods for community participation.

The simple fact is that if you have a plan as to how and when to tap community members, you gain a decisive competitive advantage.