This is a late but timely second installment of Measuring Social Media is Dangerous.

The other day I logged onto Venture Beat.  Low and behold the number of funded companies engaged in or developing social analytics tools has exploded.  There is a company to measure, well anything and everything.

Sort of reminds me of the Tower of Babble.  Lots of noise in a zillion different dialects.  A confusing mess.

While the innovation, ideas and desire to bring order to what could otherwise be the chaotic space of online human interaction is something I in fact applaud, I want to be the wet blanket for a moment.

Here is why.  Who knows what IEEE 802.11 is?  Yes, you in the third row on the left.  That’s right.  It is the standard for developing, implementing and connecting to a LAN.  Local Area Network.  From what I hear, developing and agreeing on this standard was a battle.  Everybody had a point of view and a vested interest in having their little corner of the world included in 802.11.  Sound familiar (Congress Earmarks maybe)?

In the end, without IEEE 802.11 and the recognition by the engineers developing it that this standard was needed an absolute necessity for the industry to grow, flourish and be successful.  You see, there can’t be two standards.

Without this single standard and all that is behind it, you might not be able to read this blog post unless you were tethered to your computer by a CAT-5 cable and what fun is that?

You see, we don’t yet have standards for measuring social?  What’s important?  Why?  What’s not?  Why?  Worse, unlike the engineering industry that has IEEE (a governing body), marketing and social has no such thing, so achieve anything close to a standard, we are going to have to self organize and self police and agree collectively to a standard, which ladders in and organizes all of the metrics these newly funded companies, as well as, the old guard like Omniture, Google Analytics, the platform companies, the listening engines and social networks agree upon, or the clients themselves; namely the corporations (which is more likely) to state what they want to measure, as well as, how and why.

Easy to say, difficult to do.

I’d suggest a simple laddering structure to begin with as a framework and fill the metric feeds that deliverable verifiable and empirical data which either support, pay off or feed upon the other metrics.  Think cause and effect here.  One action impacts another.  Focus on the actions that drive commerce.  If you can measure it, you can figure out the cause and effect and repeat it.  Don’t try and be so prescriptive that you try and build an algorithm to track and predict all online human behavior.  You’ll never get there.  But, like a Myers-Briggs test, you can segment and predict categorically what people are likely to do or how they are likely to act in general.  This should be your focus.

So onto a laddering structure. 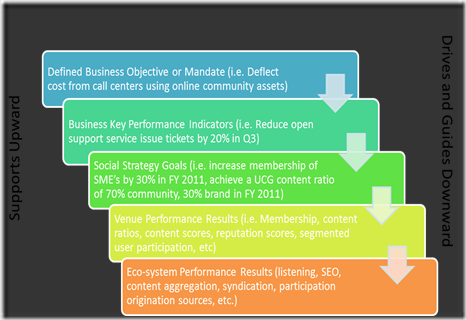 Remember also you are measuring for a number of audiences.

First, your users.  You want to optimize their experience.

Second for your team.  You want to create a clear order and priority to tasks that pay off.

Third for your management team.  Remember, many of them don’t give a rip about uniques or sentiment or earned content.  They care about what drives the P&L.

In each of these groups, you need to understand and pay off the buying agendas of each audience and be able to speak their language.   Clear and defined measurement standards will make this immensely easier.

Focus on adopting and institutionalizing this process incrementally and share your approach with colleagues at conferences.

Let’s work together to establish some general yet focused standards that prove results.  Only then will social marketing get a permanent seat at the management table.