Somebody get Bill Ford to read this

The other day I went to a meeting and the person I met drove up in his Model T.  Well, it isn’t every day you see a Model T, so it attracted a bit of attention.

So when a throng of people gathered around, my friend was more than happy to answer every last question and show it off.  It isn’t pretty, but surely a piece of living history. 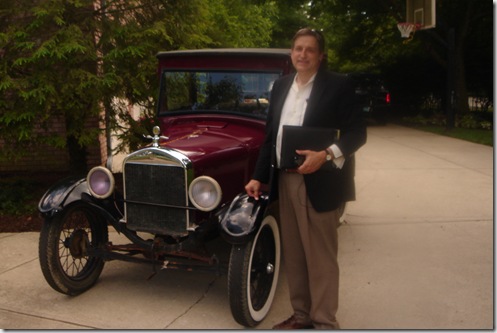 I learned that there are about 100,000 of them driving across our U.S. roads every day and driven they are.  Heck, there are about a hundred in my neck of the woods.  Their owners drive them a lot.

Unlike another friend of mine who owns a different type Ford (a GT 500 that turns more heads than the Model T), which seldom makes its way out of his well appointed garage, the Model T’s are driven a lot and pretty much all the owners are like my friend.  They love to talk about the car, the history of Ford Motors, etc.  Their knowledgeable, have great stories (like the pictures that Karl carries in the car of his grandfather in his horse and buggy on his way to buy this very car) and are generally likeable people. 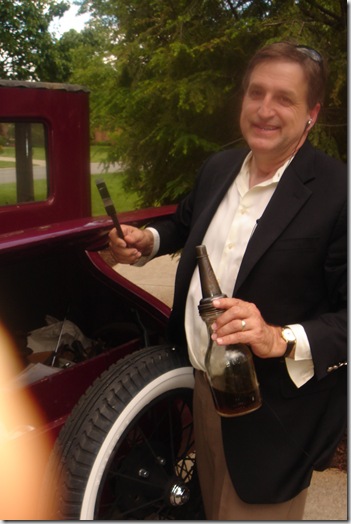 My friend’s has had no major work since it was bought in 1927; still it runs and runs as reliably as his other car, a Volvo.

Hmm.  A direct comparison between a new Volvo sedan and a Ford Model T, and he is serious about the correlation.  He talks about Ford value and engineering and he gives examples….on occasion, using the car.  Heck, we even got to see what real floor boards look like! 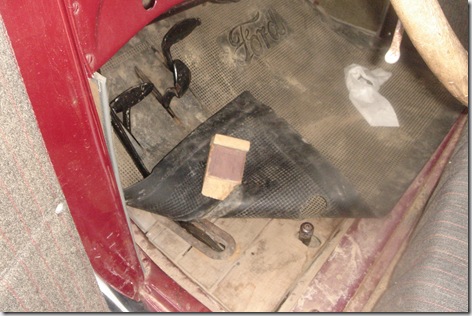 I learned a lot in talking to Karl about Ford, some things were factual like the use of vanadium that was came from the wreckage of a race car.  Nobody in the U.S. knew how to make this metal (which was much lighter and three times stronger that traditional steel of the day).  So, Henry Ford financed and set up a steel plant to figure it out and then make vast supplies of it.  I learned that 30 types of black paint were used.  Why?  Because the car was built on an assembly line (the only one at the time) different mixtures dried at different speeds, and that, along with the parts the paint went on impacted potential choke points in the assembly line.  Don’t think in it’s day that wasn’t wicked-smart innovation.  Other things were anecdotal.   Both were interesting and informative the way no tv commercial or YouTube video ever could be.

Let me tell you that the people who were asking Karl questions very much pay attention to what he says and he answers them and advocates in a very genuine way.  To the person, they leave the conversation with Karl with a very different perspective and a very positive impression of the Ford brand.

So Ford has 100 Ford Fiesta running as part of a social media campaign designed to drive interest in the European version of the car, which will debut here as the 2011 model.  Ford, like all of its, solvent and bankrupt competitors spends hundred millions of dollars on marketing.

I would content that while all of this is fine, spending the equivalent to one television advertisement to support an ambassador program of Model T drivers to spread the word about Ford Quality and value (remember, value is the new black), as well as, fuel a grass roots movement to the return of value.  Ford style.

It’s my guess that that such an approach would exceed the results of traditional mar/com tactics in terms of engagement metrics…by a lot.  A big bang for the buck.

So Bill, if you read this and I hope you do, you need to focus on tapping into the passion of your customer base and utilize what drove Ford to prominence in the first place:  Innovation and quality.  It’s all found there in that 100 year old car and its loyal, passionate, visible and quite large owner base.  I bet if you asked nicely, they’d help.

Traditional approach to marketing a brand?  No.  Innovative and effective?  Yes.