Turning innovation over to the people

Ever look at a menu that has gobs of things on it and you still can’t find something that is appealing?  Yep, happens all the time-at least it does to me.

Why is this?  It’s because even though there is a lot of stuff on the menu, the right thing isn’t there, so I have to settle for what’s already there.  More times than not, when this happens, I am disappointed.

Virtually every brand has loads of products and services.  A niche product for every niche market.  Wait, isn’t this in part why GM got in trouble?  Having a bunch of brands and each brand having multiple products and each product available with a host of different options.  Sounds sort of like taking the shotgun approach to me.

I can see it now.  A focus group convenes somewhere in Dallas, each member happily pocketing their $100.00.

Executives sit behind the glass and hear what they want to hear.  They fly back to Michigan (coach) and close the doors and get to work.  We’ll give the people what they want!  More importantly, we’ll give them what they need!  True innovation all in one package, which just so happens to share the same chassis as the Trailblazer, seats as the Enclave and instrument dash as the Vue..but never mind that!

The result?  A very time consuming and expensive do-do egg, which arrives with a thud and then silence (remember the Aztec?)

Why is it that marketers rarely learn from their mistakes and routinely try to own the entire process, keeping it locked behind an iron door?  Ok, I get the whole ‘because open-sourcing innovation eliminates the competitive advantage and element of surprise argument.  But when you as a brand face a particularly vexing problem, why not tap advocates and uber users to help innovate?  Let them help to create the lighting in a jar.  Once the idea hits a critical mass, bring it in house and do what most successful companies do best.  Manufacture, distribute and market.

Here is an example I want to keep an eye on.  In blog post, Michael Arrington created a call to action.  We Want A Dead Simple Web Tablet For $200. Help Us Build It.

Here was his call to action:  I’m tired of waiting

– I want a dead simple and dirt cheap touch screen web tablet to surf the web. Nothing fancy like the Dell latitude XT

, which costs $2,500. Just a Macbook Air-thin touch screen machine that runs Firefox and possibly Skype on top of a Linux kernel. It doesn’t exist today, and as far as we can tell no one is creating one.  Some people raised their hands, and presto.  In a very short time (think 1/10th to 1/50th the development time of a traditional manufacturer at what I guess was 1/500,000th the cost) they went from this (the ID mockup): 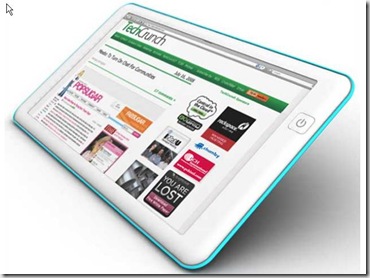 to this (the alpha…where’s the can of Diet Mountain Dew? Oh, wait, there’s a Red Bull.  Phew!): 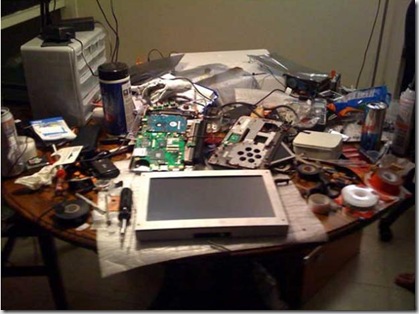 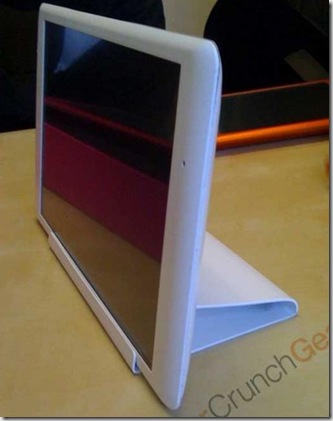 Some influential people watched on with growing curiosity and began to comment.  As did the people…specifically the niche that would snap this up.  Here are a few verbatims:

(My insertion: Well, Amazon, why doesn’t it?)

This think looks sweet. I don’t care about the specs. Do you take paypal?

It exists?! I thought this thing only popped up every year to give us that false glimmer of hope. It’s like the oversized ipod touch I always wanted.

Very excited about this! I definitely see cheap tablets (or MIDs, etc. – whatever you want to call them) as being more popular soon. There is just so much information on the web, and a tablet is the perfect device to read with while not at a desk. It just has to be fairly cheap ( <$400, less if possible), have decent battery life (5+ hours), and have a minimum 800px-1024px wide screen. I wrote up an article about this trend two weeks ago on my blog, google “Techognized” if you are interested (I do not want to be spammy by linking directly!).

These folks represent the same type of people who would stand in line for hours to get an i-phone instead of walking into a Verizon store and immediately getting a Samsung.  Gee, I wonder if there are enough of those type of people to make a market?

So big businesses and sophisticated executives understand the concept of buy vs. build.  M&A’s happen all the time (except for the period from last October until now, unfortunately) so they can act faster.  Somebody smaller and more nimble creates something cool that is worth a lot.  The bigger guy buys them and takes it to market or makes the market bigger.

The model works.  Why don’t we apply this standard elsewhere in the business?  Why not tap advocates, subject matter experts and uber users to help with development, product support and even messaging?  Give these folks the keys and let them drive for a while.  Not only might brand avoid future Aztec’s but they might save some money (in terms of mistakes and mis-cures) along the way.  Not to mention the huge demand for a product that can be built up in advance of its launch.

But hey, what do I know?  I will keep tabs on this to see how it plays out, so more later.