I had dinner last night with an economist formerly who is also a friend of mine and with whom I used to race bicycles.  Years ago, we were both track racers (riding in a velodrome with a heavily banked track).  Our specialty was the 500 meter kilo, a very fast and short race.  Later, we graduated to racing criteriums and one day ‘classics’ races.  In essence, we had become specialists.  Focusing on more dangerous, faster and shorter races.  Neither of us had the gas for longer or multi-stage races.  We’d been conditioned to perform differently.

My friend and I discussed the stage of the economy, covering four important topics.  The stimulus package, the credit lock, the paradox of thrift and wall street’s myopic approach to economic growth.  Each of these things alone are important and will have an impact on our economy for the next 20 years.  Together, no one knows what will really happen.  We have to look to the past for answers.

The net is that a free market economy always rights itself, as long as it is based on a sound structure.  Unfortunately, the hunger for profit has caused Wall Street to create new financial instruments that are essentially based on nothing other than risk itself.  Derivatives of derivatives.  Not a lot different than playing Kino or Baccarat in Vegas.  Wall Street bet on black and it came up red. 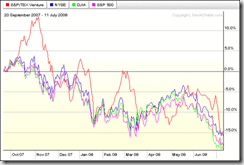 Now that a big chunk of what fuels our economy (i.e. the financial sector) is no longer truly part of the free economy, what with the financial firms being nationalized and all, we are in new brand new territory.

That said, are we are more likely to be seriously hobbled again in the future by Wall Street itself or instead by the Federal Government’s ownership interests.  Truly, these two forces are at odds.  So what will happen?  Will our growth engine of the future be a Hemi or a Hybrid?

What I mean by this can be found in the outset of this blog post where I discuss cycling and the correlation my friend made.

The macro-economic trends which drive our U.S. economy, as well as, the integrated components of our economy that aren’t U.S. based but global in nature.  Not being an economist (like my friend), I don’t want to debate where macro-economics converts to micro and the interdependencies between the two.  Instead, here’s the important notion.

As a cyclist, my friend and I focused on short, fast races and were not equipped to race longer races, say like the Tour of California.  Our economy is essentially a long race.  Wall Street has trained public companies to race short races.  Meet the quarterly guidance at all costs.  Juice the numbers, move assets, sell at a discount, just meet the numbers so our stock price doesn’t tank and keeps us from borrowing money or selling our bonds.  It’s a vicious cycle.

Getting new products to market, capitalizing on market share opportunities.  These are sprints.  Short races.  Running say Citigroup, AIG, Boeing, Microsoft.  These are long races.  As my friend reminded me, Lance Armstrong won 7 Tours.  He didn’t win every stage, or even the majority.  He won the overall race.

If we want our economy to right itself, get the speculators and gamblers out of the business decision process.  They will always promote a sprint.  Let them gamble (they always will, we can’t stop that) but not at the cost of influencing the outcome of the longer race.

Can the Mongols of Wall Street co-exist with their new bed fellows, the shackled and risk-adverse CEO’s, and their new bosses, the beurocrats and politicians of the federal government?  Maybe, if each understands their place on the team.  Sprinters sprint when appropriate and climbers climb when the need to.  My guess is they won’t play nicely.

The fact is that the Feds never, every give up anything.  So I am not sure AIG will ever return to its previous form.  So, we shall see.  It’s gonna be a long and scary ride for sure.