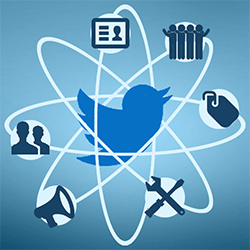 Understanding how to leverage Twitter for your brand or organization is a challenge. With over 250 million active users Twitter can feel like a giant social universe that is hard to navigate. In addition, not a great deal is known about how to classify Twitter behavior—until now. Research from the Pew Research Center’s Internet Project and the Social Media Research Foundation uncovered that conversations on Twitter create “networks”, some of which are similar to online communities. The study: Mapping Twitter Topic Networks: From Polarized Crowds to Community Clusters found that these networks develop as Twitter users determine who to reply to or mention in their tweets. For example, when a topic was political in nature, the study found that two separate and polarized networks formed and for the most part did not interact or overlap with each other. This is a very different picture than other types of conversations.

Looking at thousands of conversations, the research uncovered six social media network archetypes on Twitter. By creating maps, the research team discovered that each network has a different structure of connection and influence:

Polarized Crowd: Polarized discussions feature two big and dense groups that have little connection between them. Because these groups are not interacting, they are not arguing. They are ignoring one another while providing links to different online resources and using different hashtags that support their views and positions.

Tight Crowd: These discussions are characterized by highly interconnected people with few isolated participants. Often these networks exist offline and on other social media so they are not formed but rather supported by Twitter. Many conferences, professional topics, hobby groups, and other subjects that attract communities take this Tight Crowd form.

Brand Clusters: When products or services or celebrities are discussed on Twitter, there are often comments from disconnected participants. Brand mentioning participants focus on a topic, but tend not to connect to each other. The network is really a collection of isolated participants.

Community Clusters: Unlike brand clusters, some popular topics may develop multiple smaller groups, which often form around a few hubs each with its own audience, influencers, and sources of information. These networks offer the opportunity to connect with an influencer and other audience members providing more interaction.

Broadcast Network: Breaking news stories and the output of established media outlets and pundits are characterized by many retweets. Broadcast networks have a hub and spoke structure. The network is a collection of isolated participants.

Support Network: Some brands and organizations use Twitter as a tool to address customer issues and complaints. In this network, the hub responds to many otherwise isolated users, creating outward spokes. Because the tweets are product and service related and often respond to specific questions or concerns, there is limited retweeting.

These six network types begin to demystify how both users and topics trend on Twitter. It also provides some insights into how Twitter, while a social network behaves differently than other social platforms that have a direct or implied level of interaction. And, Keep your eyes open for more research from the Pew Research Center’s Internet Project on the predictability of behaviors on social media coming soon.