When is WOM not WOM?

A few weeks ago I attended WOMMA’s WOM Fest in Chicago. During the meeting, one of the speakers, Kristian Bush from the musical group Sugarland, talked about how they have used WOM to attract and build a fan base. As Kristian talked, he told a few fun stories about how the group had done things, like hidden tickets in Wal-Mart stores and then tweeted about it to create excitement for local shows – a really unique idea that builds local market excitement for their show. But it got me wondering: are free giveaways really WOM? Is that the end of the story – or just the beginning?

Traditionally, word-of-mouth marketing is defined as: an unpaid form of promotion—oral or written—in which satisfied customers tell other people how much they like a business, product, service, or event. According to Entrepreneur Media, word-of-mouth is one of the most credible forms of advertising because people who don’t stand to gain personally by promoting something put their reputations on the line every time they make a recommendation. For purists like me, word-of-mouth is about the personal experience with a product or brand. In the Sugarland example, is it WOM when someone gets free tickets to an event or it is just a great attention getting event? Or does the WOM come after the fact when the person who attends the concert shares their experience to friends and family? And, in the end, does it matter? 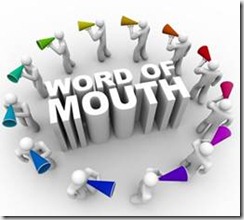 Brands want their customers to tell their friends about the product. But can you “buy” sustainable positive buzz about your brand? Why, when you don’t need to? In Sugarland’s case, I’m guessing the real WOM came from only offering the tickets via a channel already exclusive to their fans – their Twitter. It also came from all the activity that likely followed: the ticket winner sharing the experiences of their night with family and friends; people talking about the give-away; sharing their interest in the band and even people in the next city on the tour talking about the give-away, sharing their desire for tickets and even speculating where tickets might be hidden in their town. Giving away the tickets is not the WOM – it’s just the event that sparked it.

While the give-away is the fun part of the story – it’s not the whole story. And when you take the time to look at, consider and plan for the whole story, you understand the true power of WOM.