As my colleague, Pam Flores, wrote a few weeks ago, many have dubbed the 2012 Olympic Games the Socailympics. Why? Because social media will be as prevalent at the 2012 games as bad blazers and white pants. (Really, don’t get me started.) 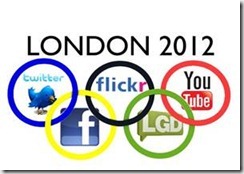 Currently, Facebook has about 900 million users, and 150 million for Twitter. In addition, many people have smartphones, iPads and other devices allowing them to connect socially to the games as opposed to just watching them on TV. As summarized by Alex Huot, the International Olympic Committee’s director of social media: “We are at a dawn of a new age of sharing and connecting, and London 2012 will ignite the first conversational Olympic Games, thanks to social media platforms and technology.”

Unlike some organizations, the International Olympic Committee was ready for the social media marketing onslaught. They developed and repeatedly distributed the IOC Social Media, Blogging and Internet Guidelines for participants and other accredited persons at the London 2012 Olympic Games. Even before the games, athletes from around the world took to Facebook and Twitter to share their hopes, dreams and opinions of the competition.

But, what happens when you don’t play by the IOC rules? Just ask Greek triple jumper Paraskevi Papachristou, who was suspended for making “comments that go against to the values and ideals of Olympism” via Twitter. Switzerland‘s Michel Morganella was also expelled from the Olympics for posting a message on Twitter that “discriminated against, insulted and violated the dignity of the South Korea football team as well as the South Korean people.”

Even before the Games began, Australian swimmers, Nick D’Arcy and Kenrick Monk, were disciplined by their country’s swimming team after they posted a picture on Facebook in which they posed with weapons. Their punishment: they were banned from using social media during the Olympics and sent home immediately after their events.

Athletes were not the only ones who crossed the line and did not follow the IOC’s social media rules. Reporter Guy Adams of The Independent had his posting privileges revoked for sending a negative tweet of the Olympic coverage that included an NBC executive’s email address.

The lesson to be learned is the same for Olympic athletes as the person in charge of your corporate Twitter account: whether or not you agree with them, follow the rules or be prepared to pay the price.